Translate this page into:

© 2021 Published by Scientific Scholar on behalf of Journal of Skin and Sexually Transmitted Diseases
Licence
This is an open-access article distributed under the terms of the Creative Commons Attribution-Non Commercial-Share Alike 4.0 License, which allows others to remix, tweak, and build upon the work non-commercially, as long as the author is credited and the new creations are licensed under the identical terms. 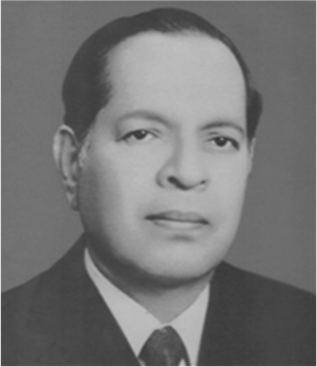 Dr. Bhaskara Menon Ambady was born on December 28, 1912, in Tripunithura, Kerala. He secured his MBBS degree from the Madras University and completed his house surgeoncy in 1938. In 1940, he was commissioned in the Indian army in the Indian medical service and later the Indian army medical corps and was sent overseas. His participation in the overseas battles in the Second World War left him with shell shock, burst eardrum, and fracture of the left ankle. He returned to India in 1943, but continued in the Indian army and was posted in various military hospitals till his release in February 1946. The same year, he was appointed as a venereologist in Government Hospital, Ernakulam. In 1949, he went abroad, first to the USA and then to England, where he pursued postgraduate studies in dermatology, venereology, and leprosy. On his return, he joined Kerala government medical services. He worked initially in the Government General Hospital, Ernakulam. In 1954, he joined Government Medical College, Thiruvananthapuram, and rendered his services as a teacher and then as the head of the department of dermatology and venereology. He retired from service in 1967 as the superintendent of the Thiruvananthapuram Medical College Hospital.

By all accounts, Dr. Ambady was a dynamic, shrewd, intelligent, kind, and patient-friendly dermatologist. He was far ahead of his time and in those days when a dermatologist’s armamentarium included only four ointments, two lotions, one liniment, one cream, and a few antibacterial agents, he had evolved many innovative ideas for treating his patients.[1,2] In all matters clinical, his acumen and judgment were sound.[3-7] His bedside manners were exemplary. He was one of the few specialists of the time who was truly compassionate to his patients, whatever be their social or financial status, with no thought of monetary benefits.[8] Apart from his work at the medical college and his practice at home, he also used to find time for house calls for the really sick patients.[8,9]

He was always a great support to his junior colleagues and subordinates. He encouraged the publication of papers and would always help his less experienced colleagues to publish papers. He also encouraged attending conferences. A fond memory shared by all his junior colleagues is that of the many journeys in his car to meetings of the specialty in various towns in the state. He took fatherly care of female colleagues who travelled with him.[10] He also made it a point to take group photographs each time someone from the department retired or was transferred to another place and to frame and hang those photographs in the department with their names printed on it.

His leadership qualities were evident from a young age. The outstanding centenary celebrations of Madras Medical College in 1935 were brought about by the efforts of Dr. Ambady, then general secretary of the college union. “He breathed and suffused an air of confidence. He infected others with his enthusiasm, and all worked for him ungrudgingly, willingly, and happily” described Dr. R Ananthanarayan, a friend and colleague.[8] In later life, he continued to exercise his wonderful ability to lead. He had rendered his services as the secretary and vice-president of Kerala branch of the Indian Medical Association (IMA). He was also instrumental in acquiring the land for and building the IMA House in Red Cross Road, Thiruvananthapuram. He always emphasized the importance of associating with other branches of medicine, for a dermatologist’s overall development. He used to say, “We are not the tail end of medicine, but part and parcel of the whole.” He played a leading role in the amalgamation of various dermatological societies of India into the unified Indian Association of Dermatology, Venereology, and Leprosy (IADVL) in 1973 and was the national president of the IADVL during 1974–1975.[11] The first annual conference of the association under the banner of the IADVL, independent of the Association of Physicians of India, was held in 1975 at Thiruvananthapuram, under the chairmanship of Dr. B. M. Ambady, and was extremely well received.

He was a well-known personality in Thiruvananthapuram, not only as a great doctor, but also as a keen sportsman, and an active member and office bearer of many sports organizations. A Lion and a Freemason, he played a significant part in the social life of Thiruvananthapuram.[8]

He passed away on September 14, 1975. “The Ambadi Oration,” the most prestigious award in India to be annually presented to an Indian dermatologist, serves to introduce to the new generation of dermatologists, the legend that was Dr. Ambady. And as the saying goes, “A teacher never dies.” Many of his qualities, as a teacher and as a doctor, have been imprinted into the minds of his colleagues and students, including me (Dr. P Sugathan). Through us he lives.

The authors would like to thank Smt. Leela Muraleedharan, Dr. Ambady’s eldest daughter, for providing the details of his early life and Army service, as well as copies of previous articles published about him.

Not required as there are no patients in this article.

Dr. Paramoo Sugathan is on the editorial board of the journal.

Published by Scientific Scholar on behalf of the Indian Association of Dermatologists, Venereologists and Leprologists – Kerala State Branch, India

This website uses cookies to improve your experience while you navigate through the website. Out of these, the cookies that are categorized as necessary are stored on your browser as they are essential for the working of basic functionalities of the website. We also use third-party cookies that help us analyze and understand how you use this website. These cookies will be stored in your browser only with your consent. You also have the option to opt-out of these cookies. But opting out of some of these cookies may affect your browsing experience.
Necessary Always Enabled
Necessary cookies are absolutely essential for the website to function properly. This category only includes cookies that ensures basic functionalities and security features of the website. These cookies do not store any personal information.
Functional
Functional cookies help to perform certain functionalities like sharing the content of the website on social media platforms, collect feedbacks, and other third-party features.
Performance
Performance cookies are used to understand and analyze the key performance indexes of the website which helps in delivering a better user experience for the visitors.
Analytics
Analytical cookies are used to understand how visitors interact with the website. These cookies help provide information on metrics the number of visitors, bounce rate, traffic source, etc.
Advertisement
Advertisement cookies are used to provide visitors with relevant ads and marketing campaigns. These cookies track visitors across websites and collect information to provide customized ads.
Others
Other uncategorized cookies are those that are being analyzed and have not been classified into a category as yet.
SAVE & ACCEPT